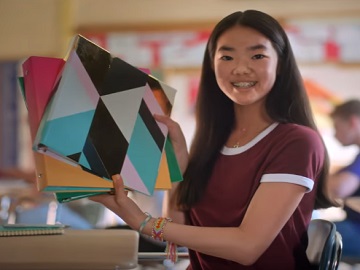 The spot, created by BBDO and titled “Back to School Essentials,” opens with various students who showcase some of their school gear. A boy says his mom got him the perfect bag for back-to-school, another one says the headphones he’s wearing are just what he needs for studying, and another one, who’s running down the hallways, says the sneakers he’s wearing are just what he needed for the new year. The video soon takes a dramatic turn as sounds of gunshots are heard in the background and kids are trying to escape the shooting by running away, throwing themselves out of the window or hiding. A girl that choose this last alternative is seen writing a text message to her mother, saying “I love you mom,” and crying while explaining that it’s her first phone, bought to help her keep in touch with her mom.

“It’s back to school time and you know what that means. School shootings are preventable when you know the signs,”
onscreen lines read at the end of the video, which also encourages viewers to learn more at the organization’s website.

The NGO first launched its campaign aimed at preventing gun violence in schools, in 2016, to commemorate the December 14, 2014, mass shooting at Sandy Hook Elementary School in Newtown, where 20 children and six adults were killed. Nicole Hockley, co-founder and managing director of Sandy Hook Promise, whose 6-year-old son, Dylan, was killed in the 2014 school shooting, said in a press statement that “parents don’t really understand the new
normal. They don’t really understand active shooting drills, the violence that goes on in schools, that this violence is preventable”.