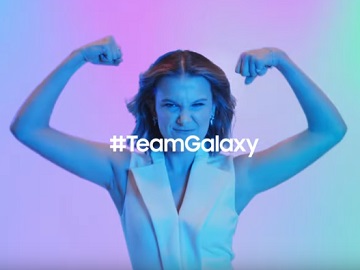 Samsung has launched a new ad campaign, aimed at inspiring people to do what they can’t and make anything possible.

Released with the #TeamGalaxy hashtag, the series of ads features Millie Bobby Brown, Steve Aoki, Lil Miquela and Ninja as proof that you can #DoWhatYouCant. The Stranger Things star shares her story about her dream of becoming an actress and her ambitions, while posing in different situations – as an actress backstage, urging her social media fans to “continue spreading love and kindness,” as a model during a photo shoot, and as a youngster, hanging out in her living room, as UNICEF’s youngest ever Goodwill Ambassador, and as a director.

“But I want to create opportunities for myself in all different areas. That’s the idea behind Team Galaxy. There’s no limit to what you can do,” she also says toward the end of the 30-second spot.

Instagram artist/model and self-confessed robot Miquela Sousa (aka Lil Miquela), with 1.6 million followers, has talked with the tech giant about her favourite principles for building a personal brand, Fortnite legend Tyler “Ninja” Blevins talked about gaming as a hobby, as a career and as a community, and he also shared his opinion about the future of gaming. Steve Aoki will give people a “backstage pass” into his world of cake-throwing, bodyweight workouts, and self-care.