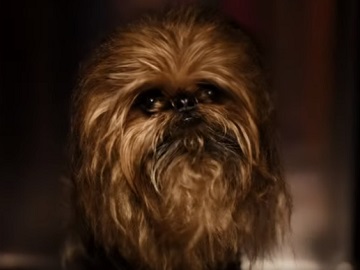 Samsung showcases how you can bring your world closer together with Galaxy Seamless connectivity.

The spot, part of the brand’s new Star Wars-themed campaign, which also encourages people to watch the upcoming installment in the iconic francise, Star Wars: The Rise of Skywalker, in theaters, features a dog in an animal shelter who becomes a celebrity online thanks to his resemblance to Chewbacca. A young girl (played by LA-based actress Emmy DeOliveira), who sees the photo on social media shares photos of the dog to different devices in his home, in her attempt to convince her dad, who’s reluctant to the idea of having a pet, to adopt the canine.

Eventually, the man agrees and he accompanies his teenage daughter to the animal shelter, but the Chewie Dog was already adopted by another family. However, the girl doesn’t seem to give up his intention to adopt and has his eyes on a cat that looks like a Darth Vader feline.

The soundtrack music is “The Imperial March” by John Williams.

With Samsung Galaxy you can enjoy, according to the brand, “seamless connectivity between Galaxy Note10, S10, Buds, Watch Active2 and Tab S6,” which means “less interruptions and more ways to connect to everything you love”.