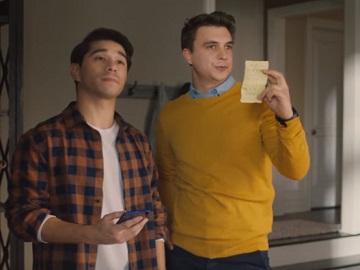 Samsung has released a new commercial, highlighting that Samsung Smart TV seamlessly syncs your Wi-Fi setup with your smart devices.

The 30-second ad features a young man setting up his TV with the help of the SmartThings app on his phone. In the meantime, his roommate shows up with a piece of paper, saying he found the Wi-Fi password in the junk drawer and starting to read it slowly, as it includes random letters and numbers. However, the password is not needed since the guy doing the setup is able to complete it with just a tap. While his friend is still reading the password, he is informed through an onscreen line that the TV setup is complete and immediately has access to streaming services like Netflix, Prime Video, YouTube, and more.

“Connect to WiFi and everything else with just a tap,” the voiceover says at the end of the commercial, which also sees the tagline “Smart made easy – QLED” flashing across the screen.