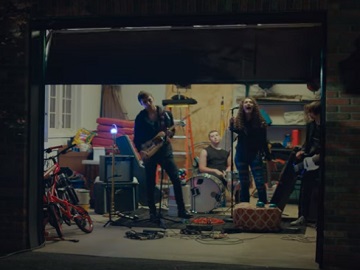 Samsung continues its “Smart Made Easy” campaign for the QLED TV with a new installment, that shows how, thanks to the TV’s WiFi connectivity, you can manage any smart device activity, like your fridge or the front door – all without missing a second of your favorite show.

The 30-second ad features a man on his sofa, in the living room, trying to read a newspaper. However, he is disturbed by rock music playing nearby. He then decides to take action and turns his Samsung QLED TV on and cancels the band practice with just one tap, using the remote. As the ad goes on, it turns out the rock band that was disturbing him was playing in the garage and had his teenage daughter among its members.

“Control your smart devices with SmartThings in Samsung SmartTV,” the voiceover says at the end of the commercial, which also sees the tagline “Smart Made Easy” flashing across the screen.

In another previous ad, the South Korean tech giant highlighted that its Smart TVs feature Bixby, which allows users to use voice commands to search for their favorite shows and manage TV apps. The spot saw a mother asking Bixby to play a cartoon when her two kids showed up in the living room, yelling at each other.