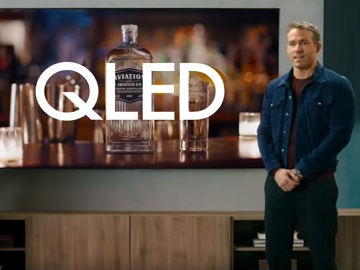 Samsung has released a hilarious new commercial for its QLED TV, in which Ryan Reynolds promotes his Netflix movie 6 Underground and his Aviation Gin.

The spot opens with the Hollywood actor standing in a living room, with a Samsung QLED TV behind him, talking about his upcoming movie, 6 Underground, which is set to premiere on December 13 on Netflix. “My new movie, 6 Underground, is so huge you’re goona want to watch it on a bigger, better Samsung QLED TV,” he says while on screen scenes from the mentioned film are shown. However, those are soon replaced by footage of a bottle of Aviation Gin, which is actually an ad for Reynold’s co-owned gin brand, described as “the world’s fastest-growing jin.” At this point, the director stops the shoot to ask Reynolds about the reason why his Aviation Gin is on TV. She thus learns that he bought mid-roll ad placement. “You bought an ad for your gin within an ad for your movie withing an ad for Samsung?” the director asks him. “Yes, it felt like the right thing to do,” the actor replies, which makes the director decide to make that work.

Reynolds has earned his fame as an original advertiser for its Davos Brands’ liquor brand, since he bbought an ownership stake in it and became its ambassador. He has also starred in a commercial for the frozen food brand Devour, featuring a Deadpool product tie, in which he called himself a sellout.