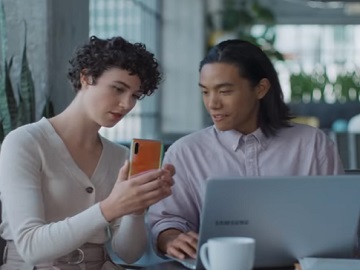 Samsung continues to promote its Galaxy Note10 with a new commercial, that shows you how to get through Monday.

The spot, that focuses on the smartphone’s Zoom-In Mic features, stars two coworkers illustrating the steps to be followed. Step one is, according to the ad, “Pinch and Zoom”. The duo use a Galaxy Note10 to do that to a colleague that fell asleep at a nearby table and is snoring, helping him thus to wake up.

“Introducing next-level power with Zoom-In Mic,” an onscreen line reads at the end of the commercial.

A previous spot for the Galaxy Note10 featured a young blonde curly woman who, inspired by an alpaca during one of her travels, sets a new trend that is followed by millions of people. Throughout the video, which is scored by The Incredible Bongo Band’s “Apache,” the protagonist is shown using the Galaxy Note10 to perform a variety of tasks, from writing down a contract that she signs with the owner of the alpaca site, to sketching hairstyles, to filming the animals for her presentation, and more.

Unveiled at the Samsung Unpacked Event held on August 7, the Galaxy Note10 went on sale August 23rd, at a price starting from $949 (for the version with 8GB of RAM and 256GB of storage). The Galaxy Note 10 Plus was announced at the same event and hit shelves August 23rd, too.