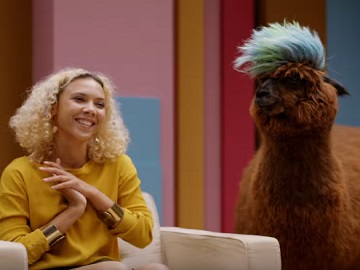 The 60-second ad features a young blonde curly woman who, during one of her travels, as she passes by an alpaca site, comes up with the idea of painting the animals’ hair in bold colors and pitching it then, at work, as “The Next Big Trend”. Her idea is well received and it soon turns out that rocking an alpaca-inspired bold hairstyle, featuring colors like pink, blue and green, becomes a trend followed by millions of people. Throughout the video, the protagonist, who gains recognition and is invited to TV shows, is seen using the Galaxy Note10 to perform a variety of tasks, from writing down a contract that she signs with the owner of the alpaca site, to sketching the hairstyles, to filming the animals for her presentation, and more.

The end of the commercial sees the woman at a TV shows, with an alpaca by her side, and a man in front of the TV recognizing the animal as Pablo.