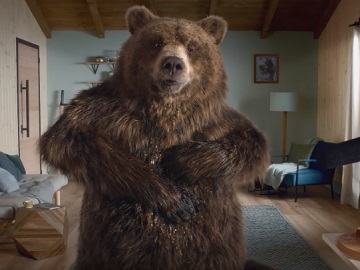 Samsung showcases some of the most innovative features of its QuickDrive washing machine in a hilarious new ad, featuring a bear that breaks into a house.

The spot, that focuses on the Eco Bubble technology, which delivers a powerful, but gentle cleaning performance to wash your laundry, even at low temperatures, shows a grizzly bear as he enters a house and indulges in honeycombs, getting his fur messy. He decides to put his “clothes” into the Samsung washing machine and, later on, realizing that his underwear would need a wash, too, adds the briefs, as well, through the AddWash door.

In the meantime, while waiting for the washing cycle to complete, he uses a picture to cover his intimate part. At the end, when he puts on his fur again, the bear is now white.

The tech giant informs that EcoBubble technology mixes air, water and detergent to create soapy bubbles that quickly penetrate each fiber of the fabric for a faster and more effective wash.

The brand has also highlighted, in previous ads, other technologies of the QuickDrive Washing Machine, including the VRT-M technology, which reduces even small noises and vibration during washes thanks to a 3 Dimensional Vibration Sensor system, the Laundry Recipe, which acts as your personal laundry expert and recommends the optimal wash cycle for each load, the AddWash door, which lets you simply and quickly add extra laundry items or more detergent after your wash cycle has already started, and also allows you to easily pop in hand-washed clothes that you just want to rinse or spin dry, and the “Q-Drum”.