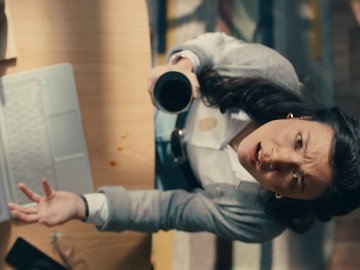 Samsung has released a new ad campaign for its QuickDrive washing machine, showcasing its innovative features.

One of the spots, dubbed “Quiet and peaceful washing,” features a woman who’s trying to do some work at her laptop, in her apartment, but is disturbed by all kinds of noises, from her barking dog, to a neighbor who’s playing the trombone, to another neighbor, who’s drilling.

The woman is then seen doing yoga at night, after turning on her Samsung QuickDrive washing machine, which, thanks to the VRT technology, ensures quieter washing.

The song used in the ad is “What’cha Gonna Do (From “Green Book” Original Soundtrack)” by Bill Massey.

The brand informs that the advanced VRT-M technology reduces even small noises and vibration during washes thanks to a 3 Dimensional Vibration Sensor system that keeps the drum exceptionally well balanced at high spin speeds by ensuring 14 stainless steel balls spin together in the opposite direction to your laundry. Even when the drum is rotating slowly, powerful magnets hold the balls firmly in place, which helps prevent tiny vibrations and noises.