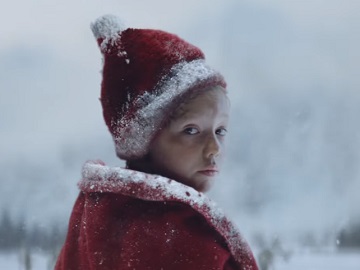 Sainsbury’s has released its Christmas advert, which also celebrates the chain’s 150th anniversary.

Titled “Nicholas the Sweep,” the 2-minute and a half film is set in 1869, when the first Sainsbury’s store was opened and tells the story of Nicholas the Sweep, an orphan chimney sweep who is wrongly accused of stealing a clementine from the Sainsbury’s store and banished from the town. Mary Ann Sainsbury, who knows the boy is innocent, comes to his rescue and, on their way to a place where he can be safe, gives him an entire bag of clementines, telling him: “If you can’t do something special for someone at Christmas, then when can you?” This gives Nicholas the idea to share the fruits with the other chimney sweeps, by leaving them in their stockings, during the night.

The end of the film sees Nicholas back in the mountains, among reindeer, putting on a red hat (which completes his red outfit). “And that is a totally true story. Merry Christmas!” the voiceover says, while on screen the tagline “Sainsbury’s Making Christmas Christmas since 1869” is flashing across the screen.

The advert, which was filmed over the course of five days, in September, in Romania, on specially built outside the capital, Bucharest, is set to make its TV debut on Tuesday evening, during Emerdale.