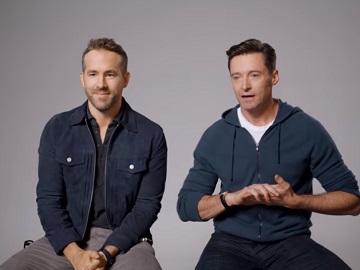 Ryan Reynolds and Hugh Jackman have presented the ads they made for each other’s businesses and the result was hilarious.

After announcing to the world that he and Jackman have called a truce to their social media war, the Deadpol star made a commercial for Laughing Man Coffee, the company launched by Jackman in 2011 to provide a marketplace for farmers in developing countries to sell their goods to consumers in the U.S. In return, the Wolverine star made a commercial for Aviation Gin, a company that Reynolds took an interest in and for which he is a spokesman.

The video for Laughing Man Coffee, running 35-seconds long and worth $1 million, according to Reynolds, features people working on the coffee plantation, in coffee shops, serving customers, as well as Jackman among those involved in the production process, and has Reynolds delivering the following message in voiceover: “Can a cup of coffee be a superhero? Cause Laughing Man beans are born with a special power. Sure, it’s the best-tasting coffee in the market, yeah, it awakens your senses with unbelievable flavor, but it also lifts up communities around the world in the form of housing and scholarships. And hugh could be behind such a hughroic company? Hm, hugh guessed it. My friend, Hugh Jackman, the loving and caring man who created Laughing Man. Make every cup count”.

Jackman, though, had a totally different approach on the task. He apparently thought the war between them was not over and the truce was not actually real, so he came up with an ad in which he makes fun of Reynolds, saying he’s “a complete and total f….”, and allowing a bottle of Aviation Gin to pour out onto the table. However, he does say “The gin’s pretty great tho. I’ll have to try it someday”.