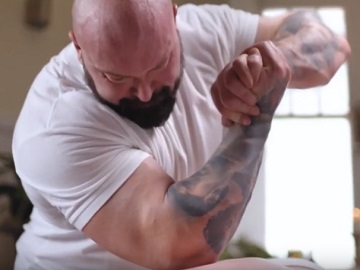 Royal Bank of Scotland has released a hilarious new ad to inform that Royal Bank customers can now see a list of their current account balances and transactions in one place, even for accounts they hold with other banks.

The 60-second spot, dubbed “Open Banking – Bouncers at the Spa,” features two male friends as they are enjoying a massage session. Well, actually, only one of them enjoys it because the other, who happens to be “appointed” to a tougher masseur, has to deal first with some physical pain. While the first one gets a relaxing head massage and says delighted “This is the life,” his fellow, laid on his belly to get a back massage, shouts “Easy!” to make the masseur use less force on his. “Aye, taking it easy. Do you know what else is easy now?” the first man asks his friend, giving immediately the answer: “Banking”. He then mentions that with the Royal Bank of Scotland app you can now look at your current account balances and transactions in one place, including those with other banks. When the other man is shouting again “Easy!” in his attempt to make the masseur taking it easy, the first one believes those words are in response to his speech, so he keeps talking about the new feature within the bank’s app, highlighting that it takes the hassle of logging into different accounts to see all your balances and transactions and that it is “a much better way to keep track of your finances”.

He then tells his friend that he doesn’t need help for this, all he needs to do is log on to the Royal Bank of Scotland’s secure app and simply follow a few easy steps.

Royal Bank of Scotland also gives people, through its website, information on how its mobile app is kept secure, a series of top security tips for banking on mobile, as well as a list of common mobile scams and instructions on how to spot them.