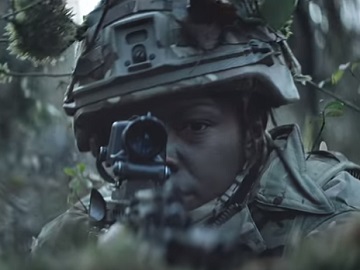 The Royal Air Force highlights, in a new ad, that “Women should be defined by actions not clichés,” and encourages them to apply to the role they want in the RAF, from spare time to the front line.

The spot features RAF women in action, while in the background various women’s advertising clichés are heard. Thus, while a RAF woman hangs out of a helicopter travelling at speed, a voiceover says “With my busy life, I don’t have time to slow down”. While on screen a parade is featured, another female voiceover says “I can’t believe we turned up wearing the same thing”. “Fine lines and wrinkles, I want to combat with the signs of ageing,” “Strong healthy hair, what’s my secret?” are other lines serving as “soundtrack” to the ad, which includes footage of real women that work in the RAF, on all lines.

Finally, another voiceover says “All day protection, now with wings, so I can handle anything,” while a Typhoon pilot is flying low level.

“Women should be defined by actions not clichés. Every role in the RAF is open to everyone, from spare time to the front line,” the voiceover says at the end of the spot, which carries the tagline “No Ordinary Job” and encourages women to search RAF Recruitment.

The advert, from agency Engine and directed by Sara Dunlop, won this year’s Channel 4’s Diversity in Advertising award, which consists in £1 million of free airtime on Channel 4. Cadbury Milk Tray, eBay and Flybe also made the shortlist.