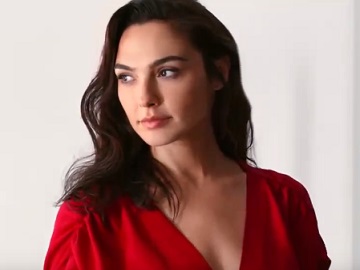 The 30-second spot, by Mario Sorrenti, features the Israeli actress and model Gal Gadot, world-renowned plus-size model Ashley Graham, British fashion model and activist on mental health issues Adwoa Aboah, and Nigerian model (and former kindergarten teacher) Eniola Abioro as “the unapologetically bold faces” of the campaign, while they are heard saying in voiceover the following: “Sometimes, the boldest act is to be absolutely candid. To be true to who I am. And make no apologies for it. With a foundation that shows the real me.” “I Can, So I Did,” they also say looking straight to the camera.

According to the ad, the new Revlon Candid, featuring ingredients like antioxidants, anti-pollutants, and anti-blue light ingredients to protect your skin, offers “flawless coverage” and “natural finish”. Available in 31 skin tone matching shades, this skin enhancing anti-pollution foundation can now be purchased at the brand’s website for $10.99.

The Wonder Woman star, who became a Global Brand Ambassador for Revlon and the face of the brand’s “Live Boldly” campaign in 2018, has also delivered an empowering message for women in Reebok’s BE MORE HUMAN campaign. “Always believe in yourself and don’t let anyone else tell you otherwise,” she said for the sports brand’s 2018 female-driven campaign, which was aimed at celebrating women who contribute to bring positive change to the world as well as at encouraging people to be the best possible version of themselves. Gadot then appeared alongside other Reebok ambassadors including supermodel Gigi Hadid, pop singer Ariana Grande, The Walking Dead actress Danai Gurira, Game of Thrones actress Nathalie Emmanuel and CrossFit athlete Katrin Davidsdottir.