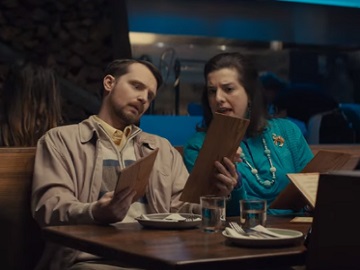 Progressive continues its “Parentamorphosis” campaign with a new installment, featuring a young couple who changed after purchasing a house.

The 30-second ad features a couple talking about Julia and Mike, a couple whom they used to love going out with, but that changed since they bought their new house. “It’s like eating dinner with your parents,” the couple declare after having dinner with Julia and Mike in a restaurant. One of the scenes features Julia asking the waitress, who says she’s in art school, if she thought about how she’s going to make money.

Toward the end of the video, Julia and Mike’s friends admit they’re learning some new things, such as the fact that if they bundle their home and auto with Progressive they could also save a bunch, like Mike did.