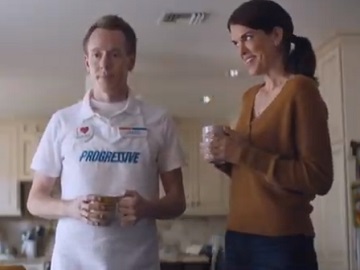 Progressive has released a new commercial featuring Jamie. This time, he is introduced to a woman’s teenage sons who mistake him with a stepfather.

The 30-second spot opens with kids’ mom introducing Jamie to her them, adding they are going to be seeing a lot more of him now. “I’m not calling him dad,” one of the boys says in a harsh voice, which makes Jamie grab a chair and start a sort of pep talk. “Look, I get it. Some new guy comes in helping your mom bundle and save with Progressive. But hey, we’re in all this together! Right, champ?” he asks the teenager, who is then standing up to go get more nuggets.

Instead of keeping silent, Jamie decides to come up with a suggestion regarding the boy’s choice of a snack: “How about some carrots? You want to ruin your dinner,” he adds, making the kid shout “You’re not my dad!” “That’s fair!” Jamie answers in a more quiet voice, realizing he overstepped.

Known for The Boss (2016), Saturday Night Live (1975) and Benched (2014), actor Jim Cashman started appearing in Progressive ads as Jamie in 2017, alongside Flo (actress Stephanie Courtney), who’s been a company’s spokeswoman since 2008. In one of the spots, dubbed “Jamie’s Twin”, he even had a doppelganger, played by British actor Jack Turner. In a recent commercial, he invited Flo and other colleagues from work to his 40th birthday bash, surprising everyone with his house, wife and kids.