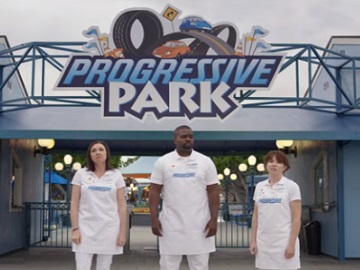 The spot features kids and adults having fun at the Progressive Park while the voiceover presents the main attractions, mentioned above. However, at the end of the video, Flo and two colleagues are seen in an empty parking lot, which used to be the Progressive amusement park, concluding that maybe the insurance-themed park wasn’t a great idea, after all.

Flo, created by agency Arnold Worldwide, is played by actress/comedian Stephanie Courtney, who took over this role for TV in 2008. Courtney also play other members of Flo’s family, including her sister, Janice, her brother, Todd, as well as her parents and grandfather.

In 2017, the insurance company tapped actor Jim Cashman to play Jamie, Flo’s co-worker. In one of the spots, dubbed “Jamie’s Twin”, he even had a doppelganger, played by British actor Jack Turner.