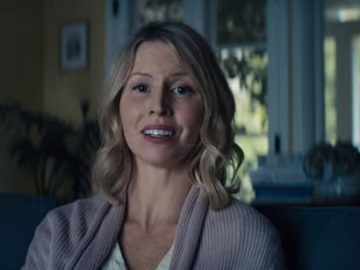 Creaky stairs, swinging light bulb, and unintentional butt dial are haunting a homeowner in the latest Progressive
commercial, part of the “Parentamorphosis” campaign.

The spot, dubbed “Parentanormal Activity,” features a woman who shares her story about how her husband changed since moving into their new house. “Ever since we moved her I’ve been noticing it. I think the house is changing him. Into his father,” the lady says, while on screen various scenes that illustrate her statement are shown. The man manages to terrify her when she’s in the bathroom brushing her teeth and in the hallway when he forbids her to touch a device because it’s in eco-mode. Another shot features him under a swinging light bulb, saying he can’t stop it from swinging and that “there must be a draft in there”.

However, toward the end of the video, the woman adds that he did save a bunch of money bundling their home and auto with Progressive.