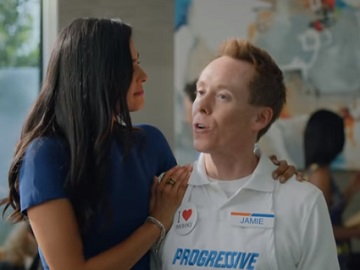 Progressive has released a new commercial, giving viewers a glimpse into Jamie’s 40th birthday bash, which has karaoke, acoustic guitars, and a lot of shocked faces.

The 30-second spot opens with Jamie being joined at his birthday party by Flo and other two co-workers, a man and a woman, who are all surprised to see Jamie’s huge house. “I know, it’s not much, but it’s home,” he answers, revealing then he has four kids. On top of all, when a gorgeous brunette, who turns out to be Jamie’s wife, shows up with a large smile on her face. “You did not tell me your friends were coming,” she says, adding about Jamie’s female co-worker that she’s “tiny like a child”. “But seriously, it’s good to be surrounded by what matters most, a home and auto bundle from Progressive,” Jamie says, looking then straight into his wife’s eyes. Without getting upset by what Jamie has just said, Jamie’s wife asks him to play the guitar for his guests, which leads to Jamie singing a beautiful Mexican ballad.

Known for The Boss (2016), Saturday Night Live (1975) and Benched (2014), actor Jim Cashman started appearing in Progressive ads as Jamie in 2017, alongside Flo (actress Stephanie Courtney), who’s been a company’s spokeswoman since 2008. In one of the spots, dubbed “Jamie’s Twin”, he even had a doppelganger, played by British actor Jack Turner.