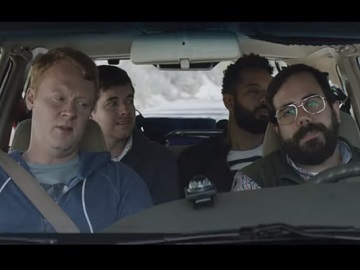 Progressive continues its “Parentamorphosis” campaign with a new installment, featuring a young man who turned into his father after purchasing a house.

The 30-second ad follows Keith and some of his friends going on a road trip. He “used to be great to roadtrip with,” according to one of his fellows, but since he bought his house, things changed. He drives very slowly, which makes everyone feel like they are driving with his dad, he wants his friends to take a selfie of him near a rest stop sign, and he reads the text on a plaque out loud. However, his friends have something to appreciate, too. Keith showed them how to bundle Home and Auto at progressive.com and save a bunch of money.

“Progressive can’t protect you from becoming your parents, but we can protect your home and auto and when you bundle with us,” the voiceover says at the end of the spot.

Created by Arnold Worldwide in 2016, the “Parentamorphosis” campaign, which became Progressive’s most successful effort without spokeswoman Flo, includes several spots directed by Roman Coppola, featuring homebuyers that assume the most annoying traits of their parents. In 2017, a commercial saw several men and women talking in a “Dad” Support Group about their transformation frustrations. Another spot featured a married couple sharing their story about how the husband, Matt, changed when they became homeowners. If, when they were dating, they used to get excited about things like concert tickets or a new snowboard, all that changed when they bought a house. “Matt started turning into his dad,” says the woman.