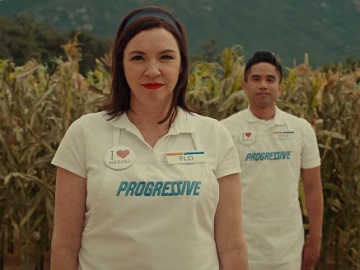 Flo and her friends emerge from the cornfields while Jamie hears voices in the latest Progressive commercial.

The spot, entitled “The Corning,” opens with a man finding his car damaged by a fallen tree and goes on with Flo and her Progressive fellows emerging from the cornfields and telling him not to worry because he’s covered. She’s also telling him that he’s saving money because he bundled home and auto. Seeing the group of mysterious people, all clad in white, coming toward him, the man asks his wife to get in the house. Things take a quite creepy turn when the Progressive representative start saying all at once “We are all here for you. All day. All night.” The man gets terrified and starts running away, leaving Flo and her team behind. “Great job speaking calmly and clearly everyone. That’s how you put a customer at ease,” she tells her team members. At this point, Jamie asks them if they also heard weird voices while they were in the corn.

Created by the Boston-based agency Arnold Worldwide and portrayed by actress/comedian Stephanie Courtney, Flo debuted on TV in 2008 and has since appeared in radio and print advertisements and web banners. In November 2014, Progressive aired its 100th advertisement featuring Flo and introduced other members of her family including her mother, father, brother (Todd), sister (Janice) and grandfather. All of these characters were also played by Courtney.

Jamie, played by actor Jim Cashman, started appearing in Progressive ads in 2017, alongside Flo. In one of the spots, dubbed “Jamie’s Twin”, he even had a doppelganger, played by British actor Jack Turner.