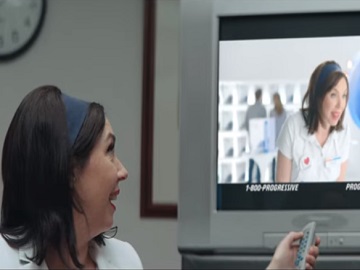 This time, the company’s spokeswoman has brought over a bunch of people for a focus group, to discuss about some key takeaways from a commercial she stars in, promoting the Home and Auto bundle. The participants at the “Flocus Group,” though have some unexpected reactions. One of them says she, as a mother, wouldn’t want her child to see Flo saying those things. Flo doesn’t understand the reason why and the intervention of another participant, who asks if kids don’t see enough violence, makes her even more confused. Finally, another participant at the focus group comes up with the idea of turning the world “bundle” into a character that might be called “Mr. Bundles,” which leads to a series of jokes from the other ones, except Flo.