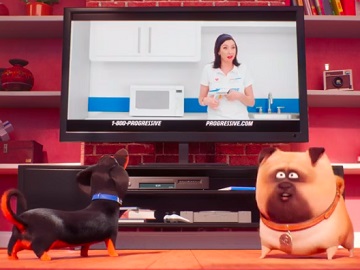 Progressive advertises Secret Life of Pets 2 in a hilarious new commercial, that features the pets getting pretty hyped up when Flo and Jamie appear on TV.

The 30-second spot, created by agency Arnold, features a couple of dogs from Universal Pictures’ sequel to the 2016 animated movie “The Secret Life of Pets” watching TV and going crazy when they see butterflies appear on the screen. A cat, who’s playing with the drawstring form the blinds, explains that those butterflies aren’t actually in the room. The pooches get excited again when they see, in a Progressive ad, the company’s spokeswoman, Flo, whom they call “the baker lady”. The cat informs her furry friends that Flo is not a baker and only wears the apron to sell insurance – “nobody knows why”. At this point, another dog shows up, explaining that she’s the Progressive Insurance lady and that they cover pets if their owner gets into a car accident. “Covers us with what?” asks another dog who’s sitting on the couch.

When Jamie is featured on screen, as well, one of the two dogs watching TV asks if this baker sells insurance, too.
“The Secret Life of Pets 2,” co-directed by Chris Renaud and Jonathan del Val, continues the story of Max and his pet friends, following their secret lives after their owners leave them for work or school each day. The voice talent includes Patton Oswalt, Harrison Ford, Kevin Hart, Eric Stonestreet, Jenny Slate, Dana Carvey, Tiffany Haddish, Lake Bell, and more.

The adventure comedy film opened in theaters earlier this week, on June 7.