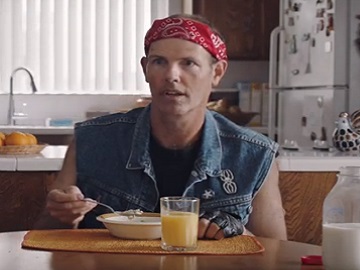 Progressive has brought back the Rebel to promote the company’s car insurance.

The spot features the rebel having a bowl of cereal for breakfast when his father asks him to put the dishes in the sink when he finishes. “No, dad, cause I’m not your little busboy,” answers the Rebel as if his response should have been obvious. “And if you, guys, keep pushing me around like this, I may have to go out and find my own car insurance,” he adds, complaining then that his cereal is soggy, without allowing his father to end his remark.

“Rebel! Save at progressive.com” an onscreen line reads at the end of the commercial.

In a previous commercial, the Rebel talks to his father about the birthday gift he could give to his mother. When his dad suggests he could make her a card or something, the Rebel says, with irony, that maybe he could bake a cake, too, or maybe he could find his own car insurance company and dump his parents’ company.