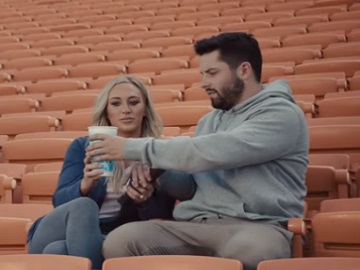 The Cleveland Browns quarterback stars, alongside Emily, in a series of ads that illustrate funny and relatable “homeowners moments,” like mowing the grass or fixing plumbing and electrical problems, as they settle into their new and unusual “stadium home”. The latest spot features Baker and Emily in their 68.000-seat stadium home, sitting in the audience, next to each other. But not for long, though. When Emily asks him to go get her a lemonade, he stands up and walks away to bring her the beverage. However, as soon as he comes back, she also asks for a straw, which implies another long walk.

“It’s your house. Protect it!” onscreen lines read at the end of the commercial.

The campaign, consisting of interconnected, 30-second episodes, that highlights two key life moments that Baker and Emily have recently experienced: getting married and buying a home, is set to air throughout the football season.

“I was drawn to Progressive because it’s a high-energy, winning team. They thrive on accomplishing what’s never been done before and what others say can’t be done,” said Mayfield of his partnership with the insurance company.

Jeff Charney, Progressive’s Chief Marketing Officer, praised Mayfield, saying “From our first meeting with Baker months ago, we saw something special with him and set out to showcase his story, and our brand, in a different light. To that end, we tossed out the typical ‘athlete-as-spokesperson’ model and took a more modern, content-rich and episodic approach that’s characteristic of today’s network shows”.