Home / Insurance & Financial / Progressive Babyman at the Office & in Restaurant, at Date Commercial 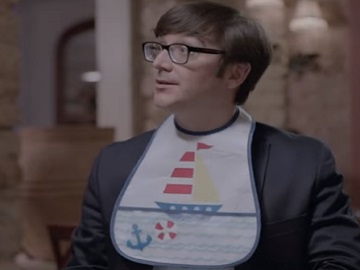 Progressive has released other two new ads featuring Babyman. The man-child character, created by agency Arnold back in 2014 for the company’s Facebook Premium Video Ads, is back to the small screen.

In one of the spots, he is carried around the office in a baby carrier, slugs milk from a sippy cup and cracks jokes at his colleagues’ expense. He approaches Charles, then Hilda, whose new haircut he notices, and then other two coworkers, who are having a coffee break.

The other spot features Babyman at a date, in a restaurant, telling the waiter they are going to start with a little bit of cereal, spread it all around the table, they are going to split the warm hotdogs and spill the glass of grape juice on the carpet. He then remembers to ask his date if she wants some juice to spill, too.

Both ads end with the voiceover saying the tagline “Act your age! Get your own insurance company”. “This creative is different than anything people have seen from us before, and was designed for the [Facebook] placement,” Jonathan Beamer, Progressive’s marketing strategy and innovation business leader, said in a press statement back in 2014, adding that “Nobody should blindly accept his or her parents’ choice – if young adults haven’t reevaluated their insurance choices, they are probably not getting the value they deserve”.