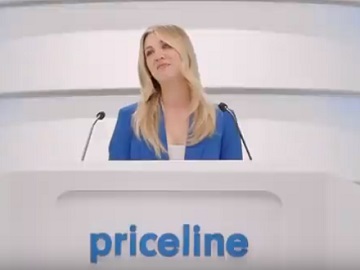 Big Bang Theory star holds a speech at the Priceline Travel Deal Delegation, where hundreds of various people gathered. “Thanks to Priceline working with top airlines to turn their unsold seats into amazing deals, family reunion attendance is up,” she says, mentioning that sports fans are also seeing more away game because Priceline offers great deals by comparing thousands of prices in real time. In addition, according to Kaley, “more people than ever are enjoying romantic getaways”. Seeing several couples doing things like feeding each other with a spoon and recreating the pottery scene from “Ghost,” she can’t help but say “That’s Gross!”.

The commercial ends with Cuoco saying the tagline “Priceline – Every trip is a big deal”.

Soap opera sensation Ashley Jones also made an appearance as Kaley’s friend in one of the Priceline commercials released in 2017.