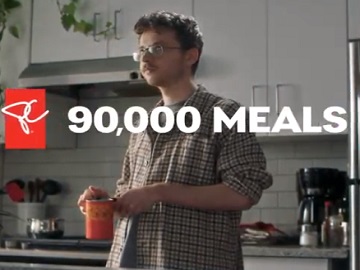 “Make the most of your next meal because each one is a chance to fall in love.” This is the message conveyed by President’s Choice in its latest ad, titled “90,000 meals”.

“90,000 meals. That’s about what we get. Sure sounds like a lot, but when the first five thousands are decided for you and the thousands later on are being so yawn and the thousands and thousands and thousands in between when we make do with that stale thing – take what we can get or get skipped altogether, the chance of having something amazing with the remaining 29000 or so to come become a huge deal. So eat something that scares you, eat a comforting thing, have what they’re having. Try things you think you’ll hate, but love, and things you think you’ll love, but… Be indulgent, restrained – ok, not that restrained – and a tad impulsive. Our senses are a gift, so let’s tear the wrapping paper off because each and every meal is an opportunity to fall in love,” the voiceover says on the 60-second commercial, which features several people as they are eating various foods, trying new meals or trying to avoid eating.

At the end of the ad, it is highlighted that, with over 300 new products every year, there’s always something to discover.

President’s Choice continues its #EatTogether movement, started in 2017, also this year by asking people to pledge to eat together more often with their family and friends in 2019. For every pledge received to #EatTogether, the brand will donate $1,00 to PC Children’s Charity to help feed and educate children across Canada, giving them as well the chance to eat together with their loved ones.