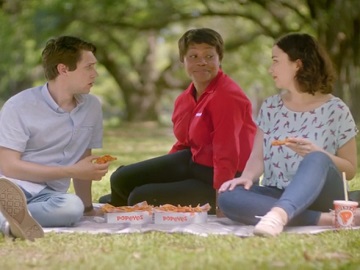 The spot features a young couple on their first date, having Popeyes new Hot Honey Crunch Tenders for lunch, outdoors. Asked by the guy if she has ever tried those menu items, the woman reveals that’s literally the only reason she’s there, with him. “Ah, that’s funny,” answers the young man a little bit embarrassed. “I mean, you’re sweet, but these are sweet and hot,” his date specifies, referring to the crunch tenders. “I can be sweet and hot, too!” he adds, but apparently she doesn’t believe him.

The end of the commercial sees the Popeyes’ lady, Annie, played by actress Deidrie Henry, joining the two youngsters, noting that their date is going great.

The voiceover then urges viewers to fall in love with three of Popeyes’ Hot Honey Crunch Tenders, plus a side and a biscuit for just $5. The offer is valid for a limited-time only, at participating locations.

Founded in 1972 in New Orleans by Al Copeland and known, until 2008, as Popeyes Chicken & Biscuits, the chicken chain had its name changed to Popeyes Louisiana Kitchen as part of a brand-identity overhaul, that also included a store-remodeling effort and the addition of limited-time product offerings like chicken-waffle tenders.