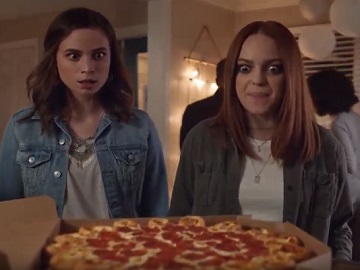 Pizza Hut announces that its Ultimate Cheesy Crust Pizza is back. The pizza restaurant chain has also released a new ad to herald the return of the fan-favorite item to its menu.

The spot features two girls at a party, looking at a Pizza Hut Ultimate Cheesy Crust Pizza and getting ready to eat it, but not before praising the crust. “Oh. My. God. Becky. Look at that crust,” one of the girls tells her friend. Soon after taking a bite, they start moving their hips in sync, as if they’re ready to dance.

Originally released for a limited time in 2017, the Ultimate Cheesy Crust Pizza is now available at participating locations for a limited time. Given that it was released in conjunction with the chain’s special Valentine’s Day offerings, which also includes a heart-shaped pizza, the crust puffs filled with cheese of the Ultimate Cheesy Crust Pizza vaguely resemble a heart. Customers willing to purchase the Valentine’s Day bundle can have, besides the heart-shaped pizza, their choice of two desserts: HERSHEY’S Triple Chocolate Brownie or Ultimate HERSHEY’S Chocolate Chip Cookie.