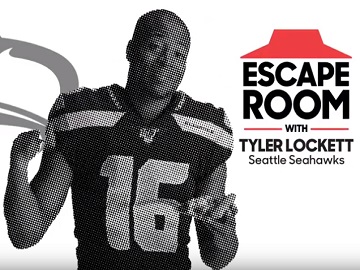 Pizza Hut has released a series of new ads to promote its Hut Hut Win game, which gives players the chance to win millions of prizes.

One of the spots features Seattle Seahawks Tyler Lockett, as he is one of the athletes lucky winners can hang out with. “Buy our pizza. Scan our box. Unlock an escape room with Tyler Lockett,” the voiceover says on the 15-second ad, which also shows a NFL-themed specially-marked pizza box, that urges customers to play now Hut Hut Win for a chance to win millions of instant prizes. Lockett also features – holding a slice of pizza, he says escaping is kind of his thing and then vanishes into thin air (a special effect, obviously).

“You can’t have football without the hut,” the voiceover adds at the end of the commercial.

Other prizes include playing ping pong with LA Rams Aaron Donald (if you pick up a large 3-topping pizza for $7.99), a game night with LA Rams Todd Gurley, and making pizzas with JuJu Smith-Schuster at Pizza Hut’s headquarters.

The pizza restaurant chain also celebrates with this series of ads its status as Official Pizza Sponsor of the NFL, a status it took over in 2018, from Papa John, which was the pizza sponsor of the NFL for eight years.

The Hut Hut Win games gives Hut Rewards members the opportunity to earn NFL team virtual game pieces for every $5 spent, in exchange for official NFL merchandise, free food and more. Those who fill half a game board (16 NFL teams) can win bigger prizes, like a trip to the 2020 NFL draft. Customers who collect all 32 NFL teams get a shot at winning one of three grand prize trips to Miami for Super Bowl LIV, complete with access to the field during the halftime show.