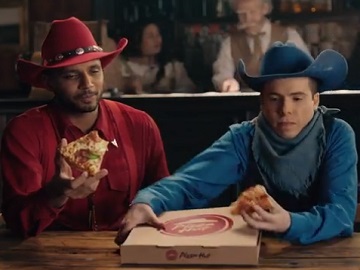 Pizza Hut Canada advertises its 5 Cheese Stuffed Crust Pizza in a new commercial, highlighting that, for a limited time, you can stuff your crust with the flavor of five delicious kinds of cheese.

The 30-second spot, set in a Western bar, features two cowboys – one of them presented as “The Pizza Hut guy” and the other as “The Other Guy” – facing each other in the “Battle of the Crusts”. While the Pizza Hut guy takes out a firm slice of 5 Cheese Stuffed Crust Pizza, his opponent makes a fool out of himself with the slice he exhibits. After taking a few bites, he throws the crust toward the Pizza Hut guy, who catches it in his fist and turns it into crumbles.

The commercial ends with the voiceover informing that, for a limited time, at Pizza Hut, customers can stuff their crust with the flavor of five delicious kinds of cheese. The option costs $2 extra on a medium 5 Cheese Stuffed Crust Pizza.