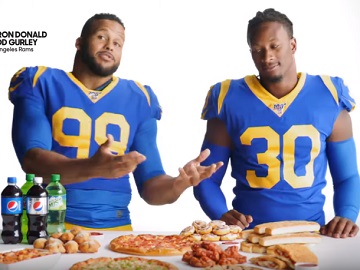 Pizza Hut invites you to get 2 or more of your favorites from the $5 ‘N Up Lineup, starting at $5 each, in a new
commercial, featuring Aaron Donald & Todd Gurley.

The 15-second spot opens with the voiceover asking the two Los Angeles Rams players, who are standing at a table filled with Pizza Hut products from the $5 ‘N Up Lineup, what they do on a buy week. Donald is the one giving an answer: “Buy pizza, buy some wings, buy a P’Zone,” he says showing off the menu items in front of him and adding “buy your own” when Gurley tries to touch something. He even slaps his hand in order to keep the food only for himself.

At the end of the commercial, the voiceover urges people to get 2 or more of their favorites from the $5 ‘N Up Lineup, starting at $5 each, and adds the tagline “You Can’t Have Football Without the Hut”.

This is not the first time Donald and Gurley star in a commercial for Pizza Hut. They have been also promoting the chain’s Hut Hut Win game, which gives Hut Rewards members the opportunity to earn NFL team virtual game pieces for every $5 spent, as well as other prizes including playing ping pong with LA Rams Aaron Donald (if you pick up a large 3-topping pizza for $7.99), a game night with LA Rams Todd Gurley, and making pizzas with JuJu Smith-Schuster at Pizza Hut’s headquarters.

The pizza restaurant chain also celebrates its status as Official Pizza Sponsor of the NFL, a status it took over in 2018, from Papa John, which was the pizza sponsor of the NFL for eight years.