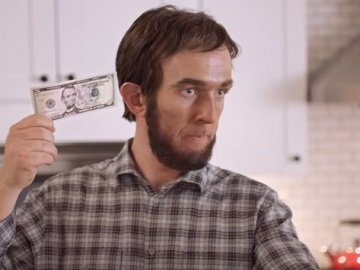 Pizza Hut advertises its $5 lineup in a hilarious new ad.

The spot opens with a father who resembles Abraham Lincoln encouraging his family, while holding a $5 bill, to say out loud “Behold the power of the $5 bill.” On the table, in front of them, are laid out a variety of Pizza Hut menu items. The man’s wife tells him that a lot of people have their faces on currency and adds that “it’s not that big of a deal.” The man, named Abe, answers that there are not that many in the United States, which makes his partner name a few. “Andrew, Alexander, Ulysses, Benjamin Franklin, he wasn’t even president,” she says. “Hangry, party of three,” Abe replies, having anything else to say.

The commercial ends with the voiceover saying “We’re more than just $5 medium 1-topping pizzas. We’re a $5 Lineup of wings, desserts and more for just a Lincoln each”.