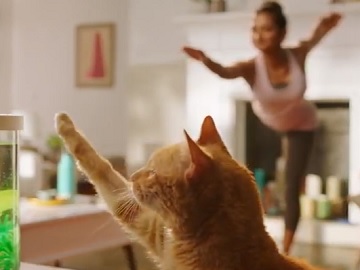 “We understand that your pet is always by your side. At PetSmart, we have everything you need to keep your pet happy and occupied.” this is the message conveyed by PetSmart in one of the its latest ads.

Titled “The Workout Body,” the 15-second spot features a young woman trying to do yoga in her living room, but being interrupted by her cat, who is in the mood to play. Later on, in a PetSmart store, an employee tells he thinks he got a solution for her. As the ad concludes, it turns out the solution was to buy a fish bowl with a small fish in it to keep the cat busy while she’s doing her morning workout.

“We get it, you got it,” the voiceover says at the end of the commercial, adding the brand’s tagline, “PetSmart – for the love of pets”.

PetSmart, the largest specialty pet retailer in North America, sells pet animal products and services such as dog grooming and dog training, cat and dog boarding facilities, and daycare, and also offers a variety of small animals for sale and adoption, such as small birds, fish, amphibians, reptiles, and several different pocket pets, like rats, guinea pigs, chinchillas, gerbils (except in California), many different species of hamster, and mice.

First opened in August 1986, the retail chain now operates in Canada and Puerto Rico, as well, and also provides a PetsHotel. While the original PetsHotel was developed and operated in Arizona, now there are already a lot a hotels located in more than 70 PetSmart stores in 24 states.

In 2017, PetSmart introduced the ED Ellen DeGeneres pet line (launched by the popular TV host), which includes a variety of pet accessories from clothing to collars, leashes, and more.