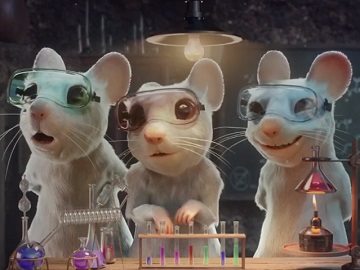 PETA UK has teamed up with advertising firm 160over90 for a new campaign, aimed at encouraging people to join them in the fight to end animal experimentation.

The 45-second spot, titled “World’s Cutest Mouse Meets World’s Biggest Threat,” features four cute white mice acting as students in a chemistry class. They are seen experimenting under their teacher’s supervision and an onscreen line reads “Animals experimenting are cute”. However, things soon take a dramatic turn, as the ceiling collapses and a human’s hand, covered in a glove, grabs one of the mice by its tail. “Experimenting on animals isn’t.” another line reads at the end of the video.