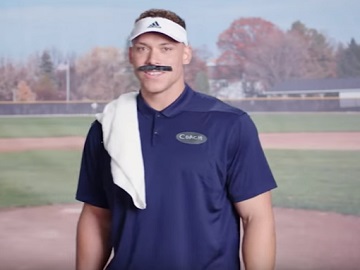 Aaron Judge has got khaki shorts, mustache and visor ready to go for his new role as a softball coach in Pepsi’s latest campaign for Pepsi Zero Sugar, “Judge For Yourself”.

The brand has released a new ad featuring the Yankees phenom as he encourages viewers to enter the Judge For Yourself Sweepstakes for a chance to play for him. “Hi, I’m Aaron Judge and I’m coaching a softball game. And I want you to be there. I’ll be hanging out all game and toss in a few tips about catching, throwing and hitting home runs. So if you want to play for me, here’s your chance,” Judge says, urging then viewers to grab a Pepsi Zero Sugar and enter the Judge for Yourself promotion.

Judge became a Pepsi brand ambassador in November 2017, when he signed a sponsorship deal that involved appearances in marketing campaigns for the Pepsi, Diet Pepsi and Pepsi Zero Sugar brands. Justin Toman, the senior director of sports marketing for PepsiCo (PEP), said in a press statement, at the time of Judge’s announcement as new spokesman, they are thrilled to welcome Aaron to the Pepsi family. “He’s one of the biggest rising stars in baseball and we’re looking forward to working together to engage baseball enthusiasts in new and unique ways next season and beyond,” he also said.