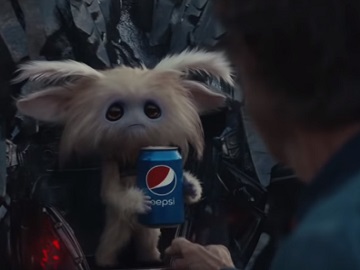 Pepsi has released a hilarious new commercial, featuring the encounter between humans and aliens.

The 60-second spot opens with breaking news announcing that an unidentified object has appeared in Wyoming and that a series of strange symbols appear to be orbiting around the ship. A Government representative informs journalists, during a press conference, that a team consisting of the best decoders in world are working on it 24/7. In the meantime, a man played by William H. Macy (who portrays Frank Gallagher in the US version of the comedy drama series Shameless), who just grabbed a Pepsi can from a vending machine, notices the UFO and the circular symbols projected on it and gets closer to it. After taking a sip, he raises the can, which leads to a huge terrifying creature to get down from the ship. As the ad goes on, it turns out this big alien was actually a mask for a small fluffy creature that “cleans” the can where Macy put his mouth and has a sip, too. The tiny creature also has an unexpected question for the man, who – left without his Pepsi can – tells it that it ows him a dollar.

Inspired by the 2016 sci-fi film The Arrival, as well as by the 2015 animated sci-fi comedy-adventure Home, the spot was created by Goodby Silverstein & Partners and aired during NBC’s presentation of the film and TV awards show.