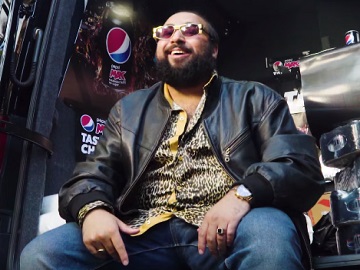 Pepsi Max has tapped Asim Chaudhry to play his character, Chabuddy G, in a new campaign, starring as the brand’s “Chief Tasting Officer”.

The People Just Do Nothing star, who prouds himself with the status of social media influencer, has been hitting the streets of London to help prove that Pepsi Max is the nation’s favourite against the UK’s biggest selling cola. After a long day in the city, he concludes that “Pepsi Max is an incredible tasting Cola” because he conducted the official Pepsi Max taste challenge and if anyone says anything different than they’re bloody liers to him.

“With my entrepreneurial flare AND smouldering good looks, I am the perfect fit to be the Chief Tasting Officer and prove, once again, that Pepsi MAX is the best tasting cola around. Watch how I influence!” Chaudhry said in a press statement.