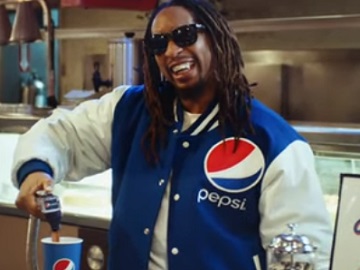 Pepsi has released a teaser for its Super Bowl LIII commercial, set to air during the big event, on February 3rd.

The spot, titled “Lil Jon’s Long Pour” and set in a diner, features Lil Jon behind the counter, dispensing the drink into a seemingly bottomless cup. Dressed in a Pepsi sportsman jacket, the rapper shouts “OK!”.

Among the other companies that will advertise during this year’s Big Game are Pringles, which revealed in three teaser videos that its Super Bowl ad will show an Alexa-like digital assistant that’s depressed because it can’t taste the brand’s chips, Mercedez-Benz will showcases its A-Class vehicle in a 60-second spot starring Ludacris, PepsiCo’s newly-acquired sparkling water brand Bubly will also air a commercial, from agency Goodby, Silverstein & Partners, featuring Michael Bublé. One of the teasers shows the Canadian singer “correcting” the spelling on cans of Bubly, with his own last name, Bublé. The roster of celebrities starring in this year’s Super Bowl commercials also includes Chance the Rapper and the Backstreet Boys, who collaborated to sing of the boy band’s most iconic hits in Doritos’ ad, Serena Williams, who will star in Bumble’s first-ever Super Bowl ad, and more. CBS is charging north of $5 million for a 30 second-spot in the game this year.

Super Bowl LIII, scheduled to take place on Feb. 3, 2019, is slated to be held in the Mercedes-Benz Stadium in Atlanta.