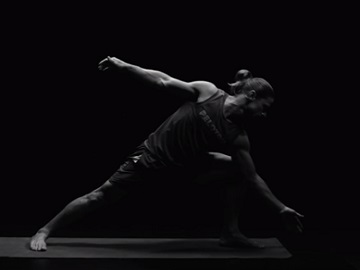 The 20-second spot features Denis performing a series of moves during a live class, while in the background the 2016 song “Thunder” by SHAED is playing.

Peloton informs that Denis grew up in Melbourne, FL, and surfed, sailed, dove, and played football through college.

“After working aboard private yachts, going to massage therapy school, and losing his roof to hurricanes in 2005, Denis flew to Los Angeles for a wedding…and never looked back. In Venice, California, Denis began teaching cycling and yoga. This eventually led to partnering in his own studios in Dallas, which in time led him to Peloton where he teaches cycling and yoga,” the brand also informs.

Peloton started offering meditation and yoga classes on December 26th, 2018. Similar to the company’s cycling and treadmill classes, these classes are available to take in-person at the Peloton Studio in New York City and for streaming live or on-demand by any Peloton Bike and Tread owner, in addition to Peloton Digital subscribers.