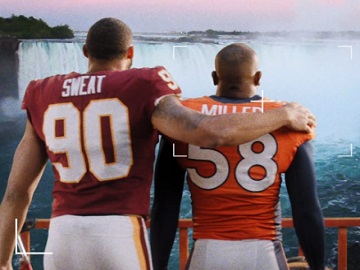 Old Spice has launched a new ad campaign, in which it shows its commitment to blocking Sweat in the NFL “no matter what the scouting reports, combine numbers, college statistics, 100’s of coaches, and your average rational person says”.

The male deodorant and body wash brand has targeted Montez Sweat, declaring that he is ruining the NFL with sweat. “Sweat? In the NFL? Not on our watch,” the voiceover says in one of the spots included in the campaign, mentioning that Old Spice Sweat Defense is the only antiperspirant committed to blocking sweat… in the NFL.” He then states that “Sweaty Montez Sweat” is “too sweaty for the NFL”.

In another ad, the Mississippi State defensive end sets the record straight, informing Old Spice that “Sweat” is just his last name and “just a word,” but the brand made a montage that shows him with sunglasses that read “I Love Sweat” and saying “I represent sweat and it’s party time” and “Sweat, party time”.

Von Miller, who has been tapped as the new Old Spice guy for the brand’s 2016-17 NFL campaign, also makes an appearance. One of the commercials features him during a press conference as he defends Montez in an unprecedented response about “Sweat just being his name.” Asked by a journalist if he agrees with Old Spice that Montez Sweat is ruining the NFL with sweat, he answers that Montez is a great guy and Sweat is just his name. “Just his last name? Can we stand behind a man who stands behind his friend?” the voiceover asks on the 45-second video, which includes footage of the two players spending quality time together as best buddies. “Yes,” the voiceover gives the answer. However, he immediately adds “Unless that friend’s name is Sweat”.

At the end of the commercial Sweat and Von Miller are labeled as “sweat friends” and the Old Spice Sweat Defense range is showcased.