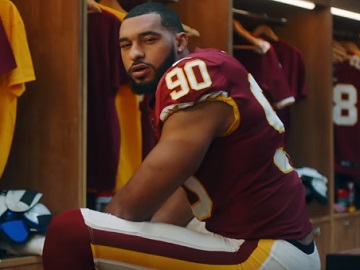 One of the spots features the NFL player in the locker room, striking back to the brand. “Hi, I’m NFL player Montez Sweat and it’s time for me to set the record straight. Old Spice, Sweat is just my last name. It’s just a word. I don’t represent sweat and won’t be a party to this at any time,” the says looking at the camera.

“That’s not what we heard,” the voiceover answers, while on screen the Old Spice Sweat Defense products are shown. The next shot, a montage of what he had previously said, features Montez saying “I represent sweat and it’s party time” and “Sweat, party time.” Moreover, sunglasses with the text “I Love Sweat” are added in CGI to accessorize his outfit.

At the end of the commercial, the voiceover says “Brought to you by Old Spice Sweat Defense. The antiperspirant powerful enough to keep sweat, even if it’s just a word name, out of the NFL” and the tagline “Sweat protection you can believe in” flashing across the screen.

Another ad in the campaign also features Von Miller as he defends Montez Sweat in an unprecedented response about “Sweat just being his name.” Asked during a press conference if he agrees with Old Spice that Montez Sweat is ruining the NFL with sweat, he answers that Montez is a great guy and Sweat is just his name.