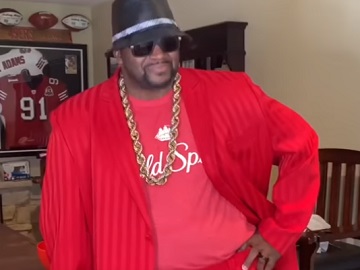 Spice Adams advertises Old Spice’s Swagger collection in a hilarious new video, that parodies one of the brand’s commercials for this scent.

The spot opens with Adams clad in a red outfit, including a red Old Spice T-shirt, accessorized with a heavy golden chain, entering a house and finding another version of himself who’s wearing a white tank and is playing a video game and eating cereal at 6pm. After being handed an Old Spice Swagger body spray, the latter transforms into a guy ready to party. Dressed in a floral print suit, he starts dancing in the living room, showing off his skills to the rhythms of a catchy dance tune.

The actor/comedian posted the video on his Fb page last month, with the description “When an Oldhead realizes Younghead is deep into gaming vortex and in danger of losing his swagger. Enter the secret ingredient… Old Spice Swagger body spray” along with several hashtags, including the campaign tagline, #SwaggerNeverDies and #SponsoredObviously.

Other commercials released by Old Spice for the Swagger scent from the Red Zone Collection, featured a father who’s taken out from his bedroom through the ceiling by a friend on a Saturday night, after being convinced to not lose his swagger with an Old Spice Swagger, and a man who’s also taken out from his apartment by a friend who doesn’t give up on him, when he finds him wearing a bathrobe in front of the TV, surrounded by lots of takeaways.