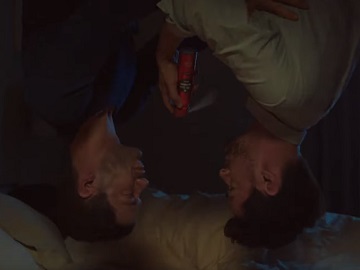 Old Spice advertises its new Swagger collection in a series of new spots.

One of them, dubbed “New Dad,” features a young man who’s awakened by the crying noises of his newborn baby. As he opens his eyes and looks at the baby monitor, another man, who turns out to be a friend of him, shows up above him, at a very short distance, hanging from the ceiling, telling him that they gotta go because the guys are waiting.

He’s initially reluctant to the idea, but it’s only 8pm on a Saturday night and his friend doesn’t give up easily. On the contrary, he’s using a secret “weapon” – Old Spice – to convince him to join him on a night out.

As the two men are leaving the room in silence, the wife of the man convinced to “escape” asks him to bring back potato skins.

“Old Spice – Never Let a Friend Lose His Swagger” an onscreen line reads at the end of the 30-second commercial.

Previous: Twizzlers Chew on It Detective in the Woods Commercial
Next: IHOP Crispy Chicken and Pancakes Troy Parody Man Hiding in Chicken Commercial