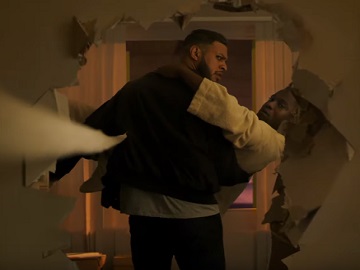 “Never Let a Friend Lose His Swagger” this is what Old Spice urges you to do in its latest ad campaign, for the Swagger scent from the Red Zone Collection.

The brand, famous for its hilarious commercials, has released a series of new spots, that aim to present Old Spice as just the thing you need to get out of your comfort zone and not lose your confidence.

One of them, entitled “Next Episode,” features a young man who goes to his friend, Derek, to convince him to go on a night out. He enters the apartment and seeing him in his bathrobe, lounging on the sofa, in front of the TV, surrounded by several takeaways, he gives him a pep talk. “Listen, this is not the end for you,” he tells him. When Derek answers that it’s over for him because he already put on his comfy pants and that he’s so cozy, his friend makes him smell an Old Spice Swagger Deodorant and tells him there’s a plate full of loaded nachos just waiting for them. The young man doesn’t accept Derek’s response, that he’s not doing carbs, takes him in his arms and starts running across the apartment, avoiding all kinds of obstacles.

After leaving a total mess behind, with lamps on the floor, light bulbs exploding, microwave “throwing” salami slices and more, the protagonist manages to make it out of the apartment and reach the car that takes him, Derek and other friends to the bar.

The brand now sells a Swagger kit, for $10, which includes a 3.8oz Swagger Invisible Antiperspirant Deodorant Spray, a 3oz Swagger Deodorant, a 16oz Swagger Body Wash, and a 12oz Swagger 2-in-1. Now, for a limited time, if you spend $25, you get free Old Spice Socks with the code “FREESOCKS”. The brand informs that you must add Old Spice socks in cart to be valid.