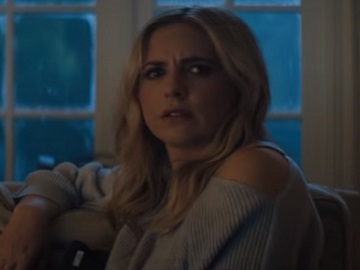 The 30-second spot opens with the Emmy Award-winning actress applying Olay cream on her face, at night, in front of her mirror, and goes on with horror-inspired scenes, featuring a masked individual who takes her and her life partner by assault in their own home. Wearing a white mask and an orange hood, the mysterious attacker is seen entering Gellar’s house and terrifying the couple.

“It will watch you and keep watching until your time is up” onscreen lines read throughout the trailer, which informs that the full commercial will be released on Sunday (February 3rd), when the Big Game will take place.
Gellar is the latest name to join a growing roster of celebrities starring in commercials for this year’s Super Bowl.

Ilana Glazer and Abbi Jacobson (creators of and actresses starring in the Comedy Central series “Broad City”), Harrison Ford, Forest Whitaker, and twin astronauts Scott and Mark Kelly will star in Amazon’s Super Bowl commercial. They have all been featured in teasers reacting to Alexa welcoming them to the Amazon Beta Testing Program. Former NFL star Terrell Owens appears as the star of a segment called “Super Bowl Party Prep With Terrell Owens” in the spot for Febreze, Maluma and Zoë Kravitz star in (separate) ads for Michelob ULTRA, Kristin Chenoweth teaches a trio of dogs how to sing the tune of Avocados from Mexico, and Christina Applegate unwillingly plays an annoying game in a grocery store parking lot in M&M’s teaser for its Super Bowl LIII commercial. However, the list is even longer, with more famous names tapped by brands to pitch their products.

This year, the Big Game, which will see the Los Angeles Rams and New England Patriots facing off, will take place on Sunday, February 3rd, and will be televised by CBS and streamed on CBSSports.com and on the CBS Sports App.