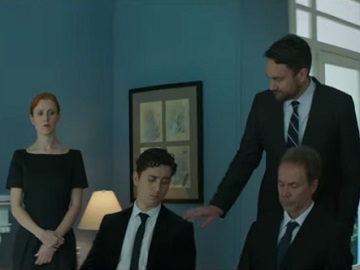 The spot features a man attending a funeral and expressing his condolences to the wrong person more than once.

First, he approaches a young man and says he’s sorry for the loss of his wife. Informed by the young man that the deceased was not his wife, the protagonist addresses a middle-aged man sitting nearby. This time, not only he says he’s sorry for the loss of the man’s wife, but also adds that they lost her too young. On this occasion, he learns that the lady was actually 93, so he realizes he should have talked to the oldest man there. He then tries to explain his mistake by saying she’s “so radiant” and “attractive”. However, he acknowleges he messed up again and finds an excuse to leave.

The commercial ends with the tagline “Never look your age” flashing across the screen, as well as with the Olay Regenerist cream.

This year marked Olay’s first-ever Super Bowl commercial. The ad, dubbed “Killer Skin” and starring “Buffy the Vampire Killer” actress Sarah Michelle Gellar, played off Gellar’s horror resume (that also includes the movies “I Know What You Did Last Summer” and “Scream 2). The clip features Gellar and a male companion shuttered away in a house during a stormy night. A scary intruder clad in a raincoat and hockey mask appears outside, then later inside the house.