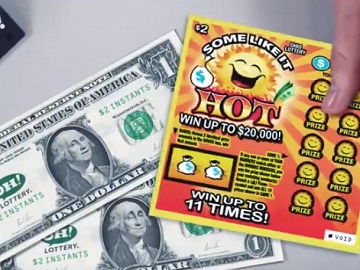 Ohio Lottery advertises its newest $2 scratch-off game, “Some Like It Hot,” which gives you the chance to win up to $20,000, in a new commercial.

The 30-second spot opens with two $1 bills as they are placed on the counter in a store. George Washington’s figure then starts talking, informing that “with just two George Washingtons you can cross the Delaware or you can play Some Like It Hot”, the newest $2 scratch-off game, which gives you the chance to win up to $20,000.

In another recent commercial, part of the “Feels Like a Million” campaign, Ohio Lottery promoted the newest family of instant tickets, Decade of Dollars. The spot, directed by Eric Anderson, aims to illustrate the feeling of “Winning enough for a new Saturday morning ritual” by featuring a father who plays music on vinyl and starts dancing with his little daughter in the living room.

Created by Cleveland-based independent agency Marcus Thomas, the “Feels Like a Million” campaign was launched by The Ohio Lottery in June 2018, with focus on the emotional impact smaller monetary amounts of wins can lead to.